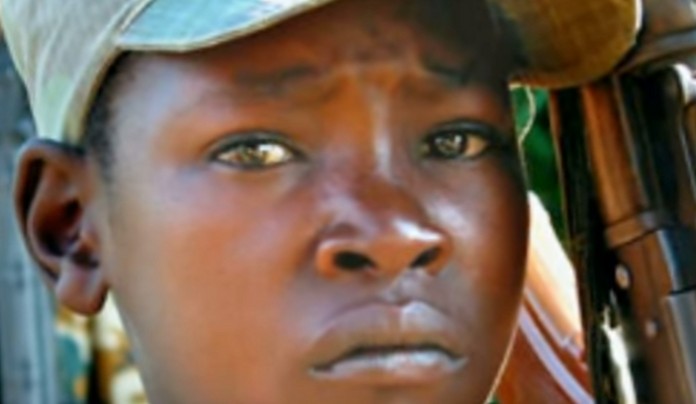 There is a long history of the military use of children. In the First World War, about 250,000 boys under the age of 18 joined the army. The Second World War saw child soldiers fighting in the Warsaw Uprising, in the Jewish resistance and in the Soviet Army. A number of international conventions have tried to limited the number of children participating in armed conflicts but data shows that this issue is still widespread.

A number of reasons have been cited for the participation of children in armed conflict, and these include:

Here’s other facts and statistics you need to know about child soldiers:

1. The use of child soldiers is a problem across the world.

Child soldiers are used in Africa, Asia, Europe, North America, Central America, South America, the Caribbean and Oceania. According to the United Nations Office for the Coordination of Humanitarian Affairs, up to half of the child soldiers in the world are in Africa. A lot of these are “invisible children” who were orphaned because of AIDS, violence and war. The participation of child soldiers has been reported in 21 on-going or recent armed conflicts in almost every part of the globe since 2001.

2. The age of a child can be as young as eight.

While there are no exact figures to prove this, it has been shown that thousands of children under the age of 18 are serving in government forces and armed rebel groups. Some of the children can be as young as eight years old when they are brought into the fold. Those who recruit children for use in armed conflict take advantage of a child’s vulnerability as they are not yet emotionally and physically mature. As such, they can be easily manipulated into committing violence they are too young to understand or even resist.

3. Advances in weaponry have led to the increased use of child soldiers.

There have been technological advances when it comes to weaponry over the years. As a result, we now have a number of weapons that are quite simple to operate which a child would not find hard to learn. Another driver is the proliferation of small arms which are easier for young ones to use than bigger weapons.

4. Gender is a non factor in recruiting child soldiers.

Girls and boys can be used as child soldiers and counties such as Nepal, Sri Lanka and Uganda have more girl child soldiers compared to other nations. Girls suffer horrible brutalities as well, including being raped. Some girls are also given to military commanders to be their “wives.”

5. Child soldiers are given different tasks.

While mostly associated with participation in combat, some children are asked to serve as cooks, guards, messengers, porters or spies. Majority are forced into combat where they are forced to the front of the line or sent midfield. Some have even been used for suicide missions.

Rehabilitation programs have been offered for child soldiers as well as the opportunity to get back to school and even receive vocational training but some children don’t have access to these kind of programs and as such, are at risk of being recruited again.