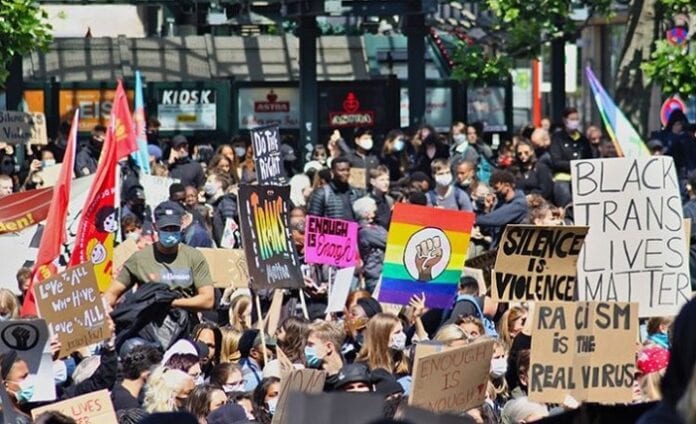 The swear words “Marxist” and “revolutionary” are now thrown around by conservatives, such as those at Heritage, the New York Post, and Fox News, with the same abandon with which the left speaks about “human rights” or “marriage,” particularly in relation to the concept of Critical Race Theory (CRT). But as someone who has studied Marxism extensively, I believe it’s necessary to state that CRT is most definitely not Marxist, nor is it in any sense revolutionary. Instead, it is an instrument of repression brandished by those in power against those whom it is feared might resist them, and those labeling this instrument as Marxist misdiagnose the problem to their detriment.

An ideology does not become Marxist because it launches an attack on white Americans for being white, or on white men as intrinsically evil human beings. Nor is feminism a form of Marxism because it attacks gender differences or the assignment of distinctive social roles to men and women. One does not change established meanings by assigning one’s own invented descriptions to whatever the media and academics decide to extend them to. Marriage is between men and women, even if the state decides to extend marriage licenses to homosexual pairs and throws pastors in jail for disagreeing with this policy. Likewise, something does not become Marxist simply because it is socially dangerous and features the term “struggle.”

True Marxism focuses on socioeconomic distinctions and the struggle by which the working-class overthrows and replaces the bourgeoisie and establishes a socialist economy, presumably by force. It has nothing to do with downgrading whites, heterosexuals, or males, and even less with supporting transgender activists in combat with cisgender bigots. It must fit other criteria than these cultural issues in order to be genuinely Marxist; and the advocates of CRT do not escape this labeling problem by claiming to have come up with a more advanced form of Marxist ideology while rejecting “vulgar Marxism.”

It is the “vulgar,” or more traditional form of Marxism which is the only real one. Transgender crusaders or black nationalists going after “prejudiced” Americans or destroying their property have nothing to do with a Marxist class struggle, as understood by Karl Marx and his socialist followers. Nor do AOC or other members of her Squad calling for higher taxes together with the teaching of CRT make them true Marxists. If anyone thinks Joe and Kamala are going to inflict huge pain on the corporations that brought them to power, that person is suffering from self-delusion “bigly,” as the Donald used to say. Mark Zuckerberg, Jack Dorsey, Jeff Bezos, and the corporate managers of American Airlines and Coca Cola do not have to worry about being expropriated in an American Marxist revolution carried out by the Biden administration.

The intersectional left has gained social control because it is allied to government administrators and corporate oligarchs, a fact which both political commentator Pedro Gonzalez and I have written about. Yet this power constellation is no more revolutionary than the sclerotic Soviet nomenklatura that fell with the dissolution of the Soviet empire. These oligarchs pulled out all stops to get rid of the Trump interregnum and are now making sure that no effective opposition remains to combat their rule. Gonzalez is correct that what we are witnessing is the ruling class striking back.

Racial strife is a way of achieving this end of rooting out opposition, and that strife occurs by deploying black nationalists and other grievance-mongers against what I refer to as “normal people.” Moreover, with help from the media, corporations, and government officials, the “black revolutionaries” seem to be prevailing. They may even be given a share of power, which Biden is divvying up with black Democrats, like his CRT-intoxicated Defense Secretary Lloyd Austin, and black racialist Kirsten Clark, whom the president’s advisers earmarked as the Assistant Attorney General for the Civil Rights Division.

But black activists are not in charge of this arrangement. They provide the front for those already in power to tighten their hold on the rest of us. The oligarchs may shift their favor from one group of grievance-mongers to another but that does nothing to seriously change the distribution of power.

What does pose a serious problem for the oligarchs and administrators are the raw emotionality and inherent conflicts among the groups they have weaponized. Why should we think that Muslim Fundamentalists, Black Lives Matter, feminists, and LGBT activists are united by more than a shared enemy, personified in the hated Deplorables? Is there anything else that holds this coalition together, other than hate, the availability of corporate money, and support from the Deep State?

Furthermore, in their eagerness to keep their motley crew of haters behind them, the electronic media giants commit massive indiscretions. New York Post columnist Bethany Mandel has justifiably scolded Twitter for abetting anti-Semitism on the left. The tech giants have kept open their services to the most outrageous “purveyors of Jew hate” after arbitrarily canceling Trump and many of his fans. Mandel cites examples of anti-Semitic outbursts that would have seemed appropriate for the Nazi Ministry of Propaganda. This may underscore a difficulty that besets the ruling class: to keep its hateful mobs behind it, it trades in hate. This is entirely obvious in the way Critical Race Theory is designed to denigrate an entire race, which has nothing to do with traditional Marxism.

Big Tech is suppressing our reach, refusing to let us advertise and squelching our ability to serve up a steady diet of truth and ideas. Help us fight back by becoming a member for just $5 a month and then join the discussion on Parler @CharlemagneInstitute and Gab @CharlemagneInstitute!