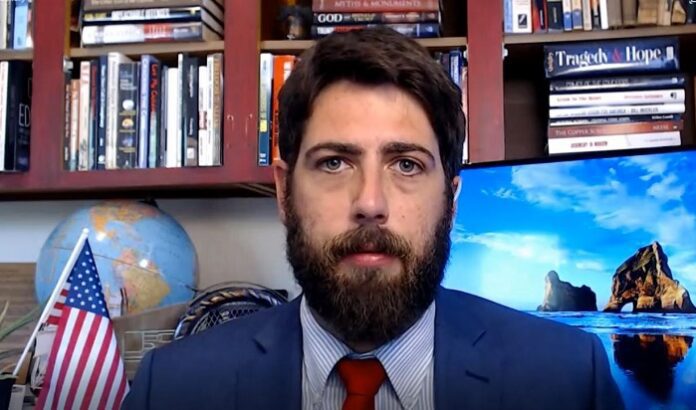 Award-winning journalist Alex Newman says, “The Deep State globalists cannot stop the “unprecedented awakening going on in America.”  Newman, who wrote the popular book called “Deep State: The Invisible Government Behind the Scenes,” explains, “Everybody knows that the press is lying.  Nobody believes the press anymore.  ‘Let’s go Brandon.’

Newman says the threats and bullying are backfiring and are not working in the least.  There is good news, and Newman explains, “They trot out these people to demoralize us and to scare us and make us think that everything is over.  Just keep your head down and comply, but it’s not working.  It is absolutely not working.  We have an awakening going on in this country . . . there’s an awakening that is happening here that is unprecedented in the modern history of this country.  It is such good news, but now we are in a race against time.  They are trying to collapse the supply chain and trying to implode everything before enough people wake up and do something about it.”

Newman points out that since 2016, the Deep State has been losing the narrative and losing badly.  Newman explains, “The entire propaganda machine was non-stop bombarding Americans with anti-Trump propaganda, and Americans went to the polls.  Even with all the voter fraud in 2016, Trump still won in an Electoral College landslide.  That’s how much they have lost control of the narrative.

They thought by shadow banning us and rigging their algorithms, people should not come across our information.  That failed, and that’s why they had to ban you.  This is why they had to ban thousands of top content creators that were making huge amounts of money for them.  They have lost total control of the narrative, and they are left with what can they blow up and what can they do to scare us?  What can they do to make us think we are all alone, and that’s exactly what we are seeing right now, and it is crystal clear.  I think everybody should be able to see this at this point.”

Join Greg Hunter of USAWatchdog.com as he goes One-on-One with award-winning journalist Alex Newman, founder of LibertySentinel.org and author of the recent popular book “Deep State.” (10/16/21)

(There is much more in the 38 min. video interview.)