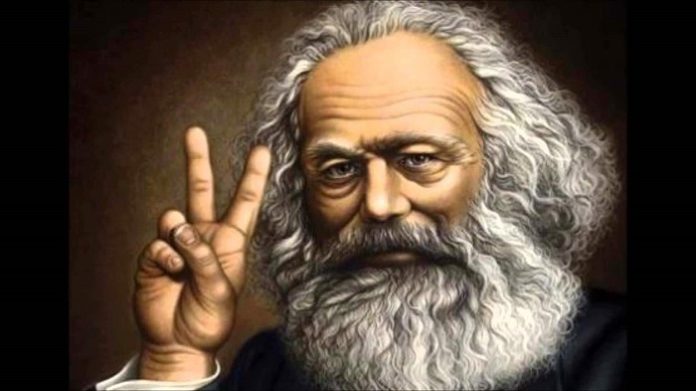 We need to drop Karl Marx like we dropped cable TV.

We’re a generation that’s sick of wars (and threats of wars), mass shootings, and media sensationalism. As the ambassadors of the sharing economy and investors in cryptocurrency, we hold innovation and entrepreneurship in high esteem.

Karl Marx is not who we think he is. His philosophy doesn’t align with our values at all. We need to look to somebody more in touch with what’s important to us — someone like Ayn Rand.

Here are 3 reasons we should kick ol’ Karl to the curb and pick up Ayn Rand instead.

Karl Marx advocates using violence to get what you want.

We hate the constant stream of wars the US gets involved in. Whether it’s Iraq or Afghanistan, or the threat of the Islamic State or North Korea, we’re just tired of it all. Why can’t everyone get along? Why do we have to topple regime after regime and flex our muscles on Twitter? Don’t even get us started on the mass shootings. It’s 2017, for crying out loud! This violence needs to stop.

If only Karl Marx felt the same way. But unfortunately, he says that the only way to bring about the ideal political state is through violent revolution:

“In depicting the most general phases of the development of the proletariat, we traced the more or less veiled civil war, raging within existing society, up to the point where that war breaks out into open revolution, and where the violent overthrow of the bourgeoisie lays the foundation for the sway of the proletariat.” – The Communist Manifesto, Karl Marx

“A civilized society is one in which physical force is banned from human relationships—in which the government, acting as a policeman, may use force only in retaliation and only against those who initiate its use.” – The Virtue of Selfishness, Ayn Rand

I groan every time a Boomer rants about “entitled Millennials these days.” We are not entitled. We are not lazy. And when they try to guilt us into going to church more or playing video games less or buying a house or getting married “while we’re still young?” Puh-lease. Emotional appeals are the worst.

And don’t even get us started on media sensationalism. We’ve had enough of the red, shouting faces, the blatant lying and fear-mongering, the “Wars on Christmas.” The media is constantly trying to pit us against each other.

It turns out that Karl Marx uses the same “Us vs. Them” hysteria as CNN and Fox News. He appeals to pathos and emotional outrage to – like we discussed above – try to get us to start a war.

“Freeman and slave, patrician and plebeian, lord and serf, guild-master and journeyman, in a word, oppressor and oppressed, stood in constant opposition to one another, carried on an uninterrupted, now hidden, now open fight, a fight that each time ended, either in a revolutionary reconstitution of society at large, or in the common ruin of the contending classes.” – The Communist Manifesto, Karl Marx

We’re not having any of that though, are we? We’re done being manipulated by outrage and hysteria. It’s time to change the channel to something a little calmer, more grounded, and personally empowering.

Ayn Rand, fortunately, has the peaceful empowerment we’re so desperately missing. While Karl Marx wants you to blame others (the bourgeoisie) for your plights, Ayn Rand wants you to introspect and perhaps reassess your values. Rather than encouraging you to camouflage yourself into a “union of workers,” she wants to empower you as an individual to create a meaningful life for yourself. Mass hysteria, be gone!

“Do not let your fire go out, spark by irreplaceable spark, in the hopeless swamps of the not-quite, the not-yet, and the not-at-all. Do not let the hero in your soul perish in lonely frustration for the life you deserved and have never been able to reach. The world you desire can be won. It exists, it is real, it is possible, it’s yours.” –Atlas Shrugged, Ayn Rand

Karl Marx wants mankind to rest on its laurels.

Welp, we’ve got pretty good iPhones, Space X can salvage and relaunch rockets, and thanks to services like HelloFresh and Blue Apron, we no longer have to go to the grocery store. Time to pack up! Call it a day! Everyone, go home! There’s no more need for innovation.

At least, according to Karl Marx.

If Marx had his way, all incentives to improve and create cooler things would be stripped out of our lives along with our private property. Following the logical progression of his communal philosophy, when we’re all slaving away for “the greater good,” and the highest achieving members of society are having the fruits of their labors redistributed to the lowest achievers (insert flashback to the freeloaders of group projects at school), that’s what will happen. Innovation would cease to occur under Marxism.

“The claim that men should be retained in jobs that have become unnecessary, doing work that is wasteful or superfluous, to spare them the difficulties of retraining for new jobs—thus contributing, as in the case of railroads, to the virtual destruction of an entire industry—this is the doctrine of the divine right of stagnation.” The Virtue of Selfishness, Ayn Rand

But with Ayn Rand’s philosophy, our stuff will always remain ours. We don’t have to share our Nintendo Switch with our little sister (who drops her phone 10 times a day) unless we want to. We can rest easy knowing that if we take a big risk (and invest in cryptocurrencies while our parents mutter “Ponzi scheme” under their breath), we have the opportunity for a big reward. And best of all, with Ayn Rand’s philosophy reaffirming our desire to be great and create great things, maybe someday we will have JARVIS, jetpacks, and flying hammocks.

The fact of the matter is that Karl Marx doesn’t align with what’s important to us Millennials. If it were up to him, we’d be starting more violent wars, we’d be widening the gap of distrust between one another, and we’d strip ourselves of all incentives to make the world cooler than it already is. So it’s time we adopt a new philosopher. Let’s look up to people like Ayn Rand.

Leisa Miller was a marketing coordinator at FEE. Driven by a desire for adventure, she moved to Warsaw, Poland in 2015 to work for a serial entrepreneur she met on the internet. 15 months and several hundred pierogi later, she came back to the States to hone her marketing skills at a tech startup in Charleston, South Carolina, before eventually making her way to Atlanta and joining the FEE team. In her free time, Leisa enjoys listening to 20th century classical music, learning languages, preparing Gongfu style tea, and swing dancing. You can follow her writing and personal projects on her website.