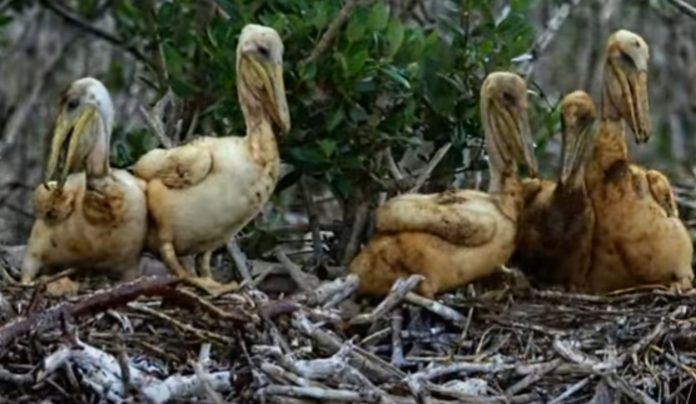 The US Gulf Coast saw an immediate negative outcome as a result of the BP oil spill environmental impact. In 2010, when an oil well exploded in the Gulf of Mexico, 11 workers were killed on Deepwater Horizon and oil gushed into the waters of the Gulf for more than 3 months. In total, about 3 million barrels of oil made their way to US shores, affecting wildlife, tourism, and the livelihoods of people who relied on sea-related industries.

Many of the impacts from the BP oil spill are still being felt, even to this day. Here is what is going on right now.

1. Buried oil is still being washed ashore by the surf.

If you visit the barrier islands around Louisiana and explore the mangroves, you’ll find that there are still thousands of tar balls sitting on the beaches. BP crews are still using tar mats to clean up the oil that is washing in from the surf. Because some of the oil was buried in the sands just off the shore, whenever the surf it rough, it coats the roots of the mangroves that are there in the open water.

This environmental impact is expected to continue through 2026 at the very least.

2. Sea life continues to be lost.

The initial impact of the oil spill from BP saw thousands of birds, fish, and other forms of sea life being killed because of the crude coating their bodies. With oil still on the bottom of the ocean and tar balls rising to the surface, sea life continues to be lost. Of particular concern is the health of Gulf dolphins, who continue to be exposed to these substances and are dying at numbers higher than normal in nature because of oil poisoning.

According to Cynthia Sarthou, who is the Executive Director of the Gulf Restoration Network, there’s no certainty that the spill’s impact will be resolved for generation to come due to its impact on the marine environment.

3. Key nesting grounds have been lost.

Louisiana has already been losing land had a fast pace. The oil spill has simply hastened the natural process. From an environmental standpoint, this means that there are many key nesting areas for birds that are being lost. In Barataria Bay, for example, several nesting islands have already been lost.

4. Some coastal industries have been unable to come back.

Although tourism has recovered along the Gulf Coast, there are some industries that are still struggling from the 2010 environmental impact of the BP oil spill. There is an overall lack of oyster production, which has the industry operating at a 50% capacity at best. Certain reefs in the area may have also been damaged, which has limited commercial fishing opportunities.

Because freshwater was released in Louisiana to push the oil away, certain saltwater industries have also seen ongoing adverse effects as well.

The BP oil spill environmental impact as seen cleanup and liability costs of over $40 billion and that number is expected to continue rising. Deepwater Horizon was a tragedy, but unfortunately it is one that continues to have consequences for the region and the world still today.