In 2010, Brian Rose was an accomplished executive with a successful career in the London banking industry. He was wealthy and lived a lifestyle that most people could only dream of. During a stay at Sir Richard Branson’s ski chalet in the Swiss Alps, he had an epiphany. He realized that he was no longer happy working in the banking industry. Although he had finally achieved the level of professional success that he worked his entire life for, he felt unfulfilled and alone among his colleagues. Soon after this realization, Rose gave up his lucrative career in banking and resigned.

Several months later, after having an engaging conversation with his martial arts teacher, Rose was inspired to create a new a talk show. He felt that the current media outlets offered little value to their viewers and took a shallow approach towards covering the news. He also noticed that their hosts did not have their heart in the interview process and he felt he could do better. Rose’s new concept was to do meaningful in depth interviews with interesting and successful people from all over the world which could ultimately serve as inspiration for others. In 2011, Rose founded London Real Studios, which consisted of a computer, microphone and his desk.

As anyone who has started a new concept from nothing will tell you, it’s no easy task, and there’s a lot of resistance to overcome. London Real was no different. Yes, there were other successful models to use as a guide, but when you start from nothing, there is a lot of work involved to get your project off the ground. When you’re the new kid on the block, no one wants to know or help you until you’ve paid your dues. This phase can be a lonely one because it’s all up to you to overcome the many forms of resistance you’re sure to experience.

Rose talks about the different types of resistance he encountered, including one of the biggest forms of resistance, ones own limiting beliefs. Resistance comes from everywhere, including the people closest to you. Despite this resistance, Rose persevered and worked tirelessly for years with no pay and nothing but his passion to realize his vision of a new and improved media format. The only metric he used to keep going was to ask himself, “is my life better this year?”

We often hear the warm and fuzzy phrase thrown around, “follow your passion” or “if you build it they will come,” but there’s much more to it than just quitting your job and starting a new life. Any major career change is a personal journey with many ups and downs, and both ends of that spectrum can get really intense. Leaving the comfort and security of an established career to pursue the uncertainty of starting a business on your own can be quite daunting.

Prepare for Highs and Lows

Yes, in theory, it is as simple as quitting your job and start doing what you love, but be prepared for the journey ahead. It’s important to go into this with your eyes wide open and properly manage your expectations. I’ve been involved in several start ups myself, and I can say from experience, there will be times you’re feeling full of doubt, scared, discouraged and want to quit. There are also great moments of triumph and personal accomplishment if you stick with it. It’s like a roller coaster ride with all its highs and lows that can take a toll on you even if your’re mentally prepared for it. Finding a way to validate your concept before you go, “all in” is always a good idea too.

Related: 8 Reasons to quit your job and start your own business

Fast forward to today, and all of Rose’s hard work and persistence has paid off. London Real is now one of the most popular talk shows on the internet. He interviews some of the most interesting and well known personalities in the world, from all walks of life. Rose has even started London Real Academy, which is a close knit network of over 90,000 subscribers (at the time of this writing). But most importantly, Rose is doing something he loves to do. If you can achieve that, you’re no longer working – you’re living.

How Bad Do You Want It?

In my opinion, resistance and challenges are the universe’s way of seeing how bad you want something, or how committed you are to your vision. I’m sure Rose had many opportunities and reasons to give up and do something more conventional, but he was a man on a mission with a burning desire to realize his vision. There’s not a force in the world who can stop that.

London Real is a uniquely formatted online talk show with a very relaxed interview style, yet a sense of depth that you won’t find on other shows. It’s also very diverse, which keeps it interesting. One day Rose will be discussing finance with billionaire, Dan Pena in his Scotland castle, and another day he’s interviewing, Graham Hancock about expanding ones consciousness through the use of psychedelic compounds. His show seems to have no boundary’s and covers all aspects of life, body, mind, and soul. I’ve followed London Real for several years and have drawn inspiration from Brian and his show for my latest roller coaster ride with Vision Launch. 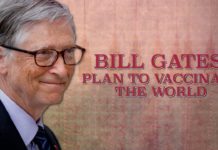 Bill Gates – The Plan To Vaccinate The World