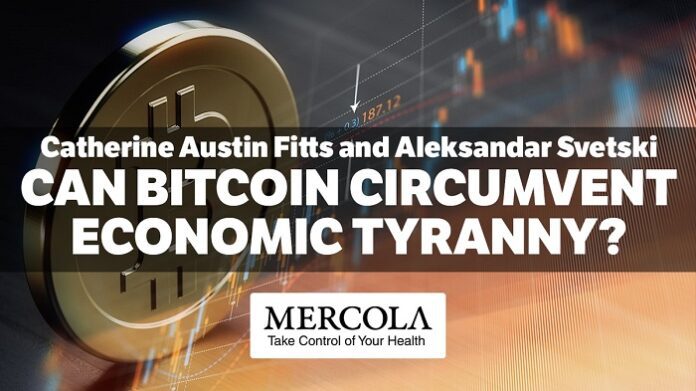 Dr. Joseph Mercola hosted a phenomenal discussion between finance guru Catherine Austin Fitts and Aleksandar Svetski, editor of Bitcoin Times magazine, to talk about the breakdown of our economy and potential solutions. This was an incredible exchange of information and insights on our current financial system, concerns and questions about how we navigate as a society while tyranny is coming down in full force, and debates on Bitcoin’s role. Both were in agreement on many aspects, but disagreed on some points, while sharing their thoughts and knowledge with a show of respect for one another and a desire to continue this collaboration further with a common goal for all – achieving individual sovereignty.

I highly recommend everyone watch this thought-provoking and intriguing discussion and think about how we can all collaborate together to create and build systems that will ensure our freedom and independence from the control grid the globalists want to lock us into. If you have ideas and suggestions, please comment below.

This article was originally published on Coreysdigs.com

Subscribe to Corey’s Digs so you don’t miss a Dig!

Corey’s Digs was created by Investigative Journalist Corey Lynn for the purpose of digging for truth in a world where nothing is as it seems, then connecting the dots and presenting her findings to you. Corey focuses on larger webs and nests, and areas that are seldom covered by mainstream media. She exposes operations, oftentimes with detailed timelines, maps, and documentation to provide the full scope of what may be transpiring, and she always cites sources with links to back it up. You can support Corey’s work here