Emily Burns had every intention of staying in Massachusetts. A longtime Boston resident, she and her husband left the city to settle in the upscale suburb of Newton in January 2020 so her three children could attend highly-rated public schools.

What followed were two years of ongoing disruption and frustration. Prolonged school closures led Burns to enroll her children in private school, but even there, continued coronavirus policies such as mask mandates angered Burns. Initially, this mom chose fight over flight.

She announced a conservative run for the Massachusetts state legislature, a long-shot attempt in a staunchly Democratic area. Her primary issue was pushing back against COVID policies, particularly those that impacted school children. Her message resonated and Burns collected more than $100,000 in donations for her campaign in just one quarter. She was an outspoken advocate for children and families and called out the Massachusetts politicians who continue to double-down on coronavirus mandates even as elected officials elsewhere eliminate them.

Burns was recently featured in a popular article, “Revenge of the Covid Moms” on Bari Weiss’s Substack, that spotlighted mothers who are fed up with endless virus restrictions and are taking action to end them.

Ultimately, Burns had enough of fighting. This week, she terminated her political campaign and explained that she and her family are fleeing to Texas where her husband has an opportunity to open a new company office.

“My leaving is entirely predicated on what is best for my family,” Burns wrote. “My trust in the political and cultural leadership of this state is totally broken. The past two years have shown me that I cannot protect my children from the ill effects of that leadership. Given the chance to escape those malign forces, I had to take it.”

Fight or flight is a choice that more Americans are facing, especially those who live in parts of the country with continued coronavirus restrictions and the constant threat that, even if ended, those restrictions could re-emerge at any time by political decree.

Indeed, this is the topic of this week’s LiberatED podcast: Should You Move?

In the episode, I talk to homeschooling mom, Bretigne Shaffer, who left California last month for more freedom elsewhere. Like Burns, Shaffer initially tried to fight, to push back against extended COVID policies and build community with like-minded people in her area. Also like Burns, she finally got tired of fighting.

This is a national trend, as US Census Bureau data released in December showed that restrictive states such as California, Illinois, New York, and Massachusetts lost population between July 2020 and July 2021, while states with less-restrictive virus policies like Texas, Arizona, and Florida gained population during that time. Writing about these population trends for FEE, economist Peter Jacobsen explained: “Lockdowns, documentation mandates, school closings, and other COVID regulations are likely just too cumbersome for some to tolerate.”

Fight or flight is a tough choice for families, but at least it’s a choice that Americans can enjoy thanks to federalism and the ability to vote with our feet. We can choose to live in a different city or state, and select different state and local governance, due to the decentralization of power envisioned by our Founding Fathers.

As more people move to states they see as offering greater freedom and opportunity, there is some concern about political change in their new states. Could newcomers bring with them policies and perspectives that could threaten the very freedom they are seeking? FEE’s Fresh Start States project helps to prevent this through outreach and information promoting the principles of personal and economic freedom to those settling in new areas.

What if You Can’t Move?

Still, for a whole host of reasons, many families can’t or don’t want to move somewhere else. In that case, they can keep fighting. Burns has some advice for families staying put.

“Start talking about your concerns publicly–and don’t pull punches,” she told me in an interview this week. “Don’t vacillate and say things work when you think they don’t. That’s how we got stuck here. You will find more people agree with you than you think. Then, if you can, run for something, and run on these issues–lean into them. These issues shouldn’t be Republican or Democrat, so run however you feel comfortable. Talk about the things that concern you–not whatever the party line is supposed to be. Being public about it will help you find the people in your area who are sympathetic, and who will form the base of your support,” she said.

It’s a dynamic moment in the US, and many individuals and families who never before considered uprooting their life for a new one elsewhere are giving it serious thought. Perhaps you are one of them.

Listen to this week’s LiberatED podcast for more insights on this topic. You can listen here, on Apple, Spotify, Google, or wherever you get your podcasts.

Kerry McDonald is a Senior Education Fellow at FEE and author of Unschooled: Raising Curious, Well-Educated Children Outside the Conventional Classroom (Chicago Review Press, 2019). She is also an adjunct scholar at The Cato Institute and a regular Forbes contributor. Kerry has a B.A. in economics from Bowdoin College and an M.Ed. in education policy from Harvard University. She lives in Cambridge, Massachusetts with her husband and four children. You can sign up for her weekly newsletter on parenting and education here. 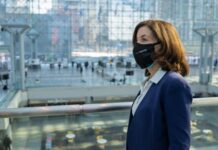