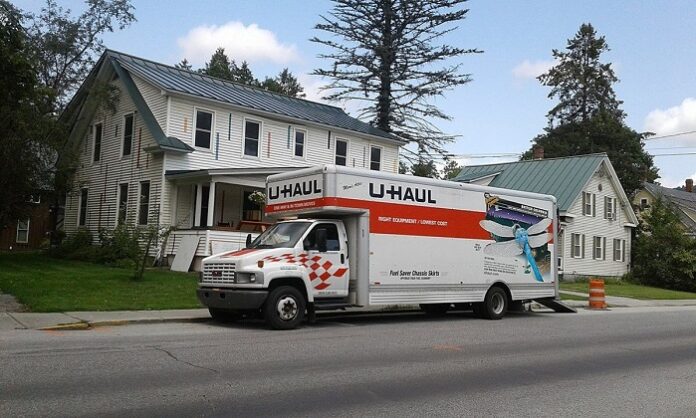 Last week, the US Census Bureau released its “New Vintage 2021 Population Estimates” for the United States and surrounding territories. I’m always especially interested in net domestic immigration numbers, which reveal whether people are coming to a state or leaving it. These numbers are interesting because, taken as a whole, net migration patterns likely reveal changing preferences for different states.

Although people have different preferences for things like weather and geography, it’s unlikely net immigration patterns are heavily influenced by these things when you compare one year to the next. Why? Well, things like weather and geography rarely change quickly. People know California has beaches, the Northeast has leaves, and Colorado has mountains. It won’t shock residents that Minnesota gets lots of snow. It’s unlikely, then, in any given year that a mass of people will move to Colorado because they suddenly decide the mountains are calling stronger this year than last.

So what factors might be at the bottom of people moving? Well, new job opportunities are likely a major factor. For example, the rise of Silicon Valley likely drew many to California to fill the hundreds of thousands of tech jobs created in the 1970s and 1980s (and beyond). Industry changes like the rise of telework, for example, could also shake-up peoples’ residency plans.

Another clearly important factor which changes (and is at least somewhat related to business opportunities) is the political environment of a state. The ruling political regime and the consequences of their policies are variables that frequently change and could easily explain changing migration patterns.

Although there are more factors involved in domestic migration than politics and policy, I believe it’s a somewhat better indicator of people’s political preferences than their voting habits. “Voting with your feet” or “exit” is a valuable indicator because it’s much more costly to individuals than voting at the ballot box.

When voters go to the ballot box, their vote is unlikely to make much difference at all. Because of this, the “cost” of voting for one party over another is minimal. It’s unlikely a single voter will ever lead to a particular policy being adopted, and it’s therefore unlikely that voters receive any benefits or punishments for a good or bad vote. As such, voters will have little incentive to spend a lot of time and effort researching which political candidates are best for them on policy. Economists call this rational ignorance. Put simply, their decision to remain ignorant about politics and politicians is a rational one, because the costs of becoming aware (time, effort etc.) outweigh the benefits.

With that said, this cost-benefit calculus often doesn’t hold for migration. When individuals move from one state to another, they are guaranteed to experience different laws. When you choose to move from a state with high income taxes to low income taxes, your decision literally changes your tax rate. On the other hand, when you choose to vote for a politician who supports low income taxes, your vote in a statewide race has almost a 0% chance of changing your tax rate.

Voting with your feet guarantees you have skin in the game. And, luckily, the US system of federalism ensures that moving to different states, while certainly an investment, is not out of reach. Getting a new tax policy by moving to a new state is certainly easier than moving to a new country, for example.

The first interesting observation we can take from the census data is that there are three clear “leading states” that are losing the greatest number of people. There are two different ways we could think about a lower population. First, we could think about the lower number of people in a particular state. Alternatively, we could think about how much smaller the population of a particular state is in percentage terms. For example, if there are 1000 less people in Kansas this year relative to last, that’s a much larger percentage decrease than if there are 1000 less people in New York this year relative to last.

Luckily for the ease of this analysis, the top 3 losers in absolute numbers are among the top 4 losers in terms of percent. This top 3 consists of New York, California, and Illinois. Those states each lost over 100,000 people.

California’s drop is a far departure from it’s norm. Indeed, California’s population was increasing from before 1900 until 2019. However, someone with a keen eye might point out that the rate of California’s annual population increase has been falling for a long time. Since 2015, California has added significantly fewer people to the state every year. So is 2020 really off trend? 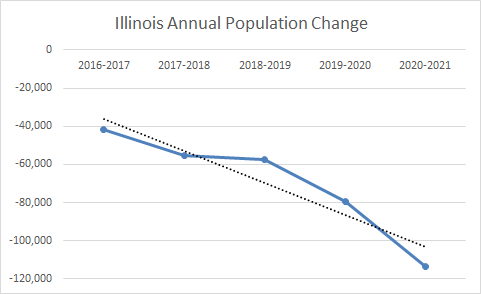 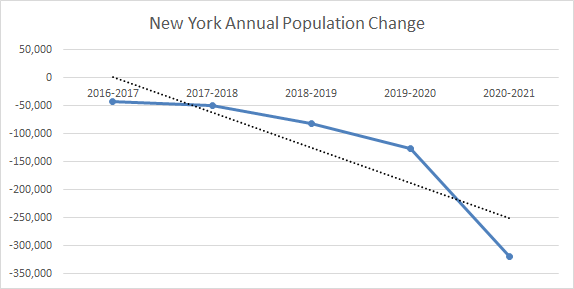 So population is plummeting, but what about the aforementioned net migration? Well, for all three states, the number of people moving to other states on net exceeded each state’s loss in population (as shown in the first table above). In other words, the main reason these three states are losing people is because people are moving away to other states, and they aren’t moving in from other states.

It’s no exaggeration to say Americans are fleeing these states.

What about states gaining population?

Unsurprisingly, some of the fastest growing states in percentage terms are western states close to California.

Are bad policies in the states of California, New York, and Illinois to blame for people leaving? The acceleration of exit from these states in the last two years certainly suggests some relationship between the pandemic and exit, but it’s possible that movement away from these states reflects the desire to escape high density areas where COVID can better thrive.

However, considering the net migration to Florida where population is more dense than California and nearly as dense as New York, this seems unlikely. Similarly, New Yorkers wanting to escape NYC’s density could easily escape to upstate New York, or New Jersey and Pennsylvania (which also have falling populations). Evaluating this hypothesis completely would require more detailed information, but I find it unconvincing that COVID fear is driving people from high population density states to low population density states.

Telework could also be at the root of much of this movement. New Yorkers and Californians lucky enough to capture high-paying jobs in these states may now be moving to a place with lower living costs.

On the other hand, in the case of Illinois, for example, it seems strange that residents would feel the need to move out of state to lower the cost of living. If they want to relocate to a rural area, why not just move to rural parts of their own state? If they’re moving to another major metropolitan area, how much cheaper could it be compared to Chicago? Also what percentage of employers have guaranteed permanent telework as an option?

Lastly, and I think most convincingly, it seems much of the movement could be related to pandemic policies. Lockdowns, documentation mandates, school closings, and other COVID regulations are likely just too cumbersome for some to tolerate. Anecdotally, Elon Musk, the country’s largest individual taxpayer, famously made good on his threat to move out of California over COVID-19 regulations, and many others have also left the state for similar reasons.

Regardless of the reason, the data are clear. Americans want out of New York, California, and Illinois. Those three states are the biggest (population) losers. 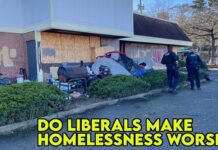 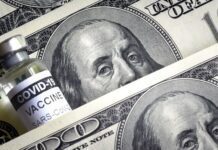 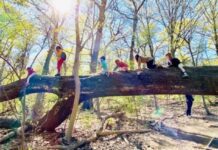