Plastic: The Good, The Bad, and The Ugly

Plastic has to be considered one of the most important materials of the 20th century. Because of plastics properties, it’s able to be used for countless applications. Plastic would also have to be categorized as the most ubiquitous material in our lives. Plastics is used in just about everything we see today. In some form or another, everywhere we look, we see plastic. It’s in our homes, our appliances, our TV’s, computers, phones, our cars, our wallet/purse, our children’s toys, it stores our beverages and food, it holds our medicine, and the list goes on and on.

As useful as plastic products have been in our daily lives, there are some real drawbacks to using it. One of the main problems with plastic is it’s not biodegradable. Plastic usage has also drastically increased in the last 60 years making up more than 12 percent of solid municipal waste, up from 1 percent back in 1960.  While plastic may be one of the most abundant materials in the world, it’s the least recycled. It’s estimated that only 10 percent of plastic is ever recycled, leaving over 90 percent in our landfills, or worse yet, our oceans. Over 8 million tons of new plastic waste enters our oceans every year. 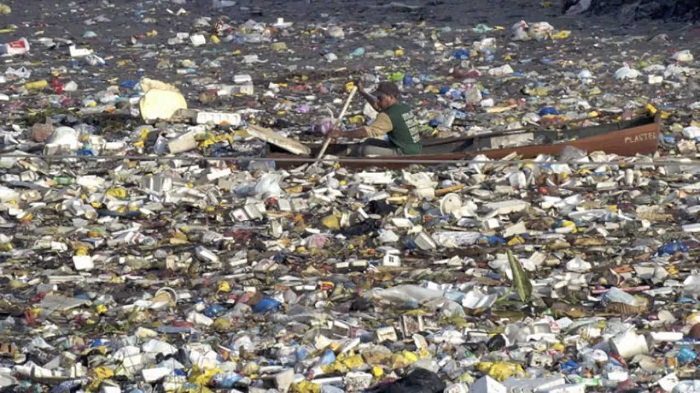 Shares
Plastic affects our environment in many other ways that most people are not aware of. The bottled water industry alone uses 17 million barrels of oil per year to make their containers. It also takes three times the amount of water to make a plastic water bottle as it does to fill it. Keep in mind, these figures are only for the bottled water industry. Worldwide we produce around 300 million tons of new plastic every year. As our population continues to explode, this model is simply unsustainable.

The good news is that the very thing that makes plastic disposal a problem also offers a solution. Because plastic is so durable and difficult to decompose, it makes it a great candidate for recycling. With the amount of plastic currently in existence, we would never have to manufacture anymore again if we just recycled what we have. However, recycling plastic has been slow to catch on, especially in less developed countries. They simply do not have the means to address such a challenge. That could be about to change, though.

What is The Plastic Bank?

The Plastic Bank is a company based out of Vancouver, British Columbia founded by David Katz and Shaun Frankson. As a longtime scuba diver and sailor, Katz became increasingly distressed by the plastic polluting the oceans around the world and wanted to do something about it. So in 2013, he and his partner started Plastic Bank. The founders have an ambitious plan to transform the world’s plastic waste into a currency in an effort to clean our environment and lift some of poorest people in the world out of poverty. The company wants to monetize plastic waste by “revealing its value.” To do so, they are building a system of commerce around plastic waste in developing countries.

How Does It Work?

The Plastic Bank sets up exchange centers in poor countries with very little economic activity. Considering over a third of the world population lives on less than $2.00 per day, that’s a pretty big market. The Plastic Bank encourages people in local communities to collect the plastic waste by offering them goods and services in exchange. These goods and services include cooking oil, clothes, use of electric and internet access. The centers also have a catalog of items that people can order from. The collected plastic is sorted on site, shipped and then recycled into plastic feedstock. The end product comes in the form of pellets, which is then sold to participating manufacturers as “Social Plastic™.” 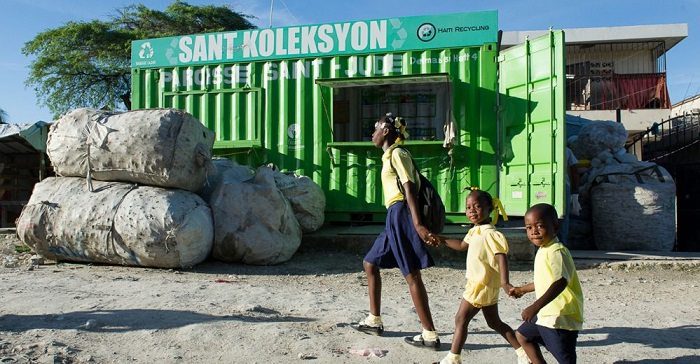 The Plastic Bank operates in Haiti and manages 29 markets run by local entrepreneurs in Port-au-Prince. More than one-third of the markets managed by The Plastic Bank get their electricity from solar power. Since 2015, Plastic Bank has recycled more than 7 million pounds of plastic and has generated more than $600,000 for Haitian communities in the process.

The company is hoping to convince some of the large brands to buy Social Plastic for all the social and environmental good that can be achieved. The Plastic Bank pays more for their plastic than they would if they were just buying plastic as a commodity because they are trying to build a system that can change people’s lives and clean our environment.

One of The Plastic Banks goals is to provide local communities with 3-D printers so they can be used to print useful items while at the same time empower economic growth. With an abundance of the raw material, these communities can print a wide assortment of items that can be used locally or can be sold to other nearby villages.

Here is an example of how the founders envision Social Plastics could be implemented. This is from Shaun Frankston’s Changemakers page:

Picture Maria, a single mother who previously lived on less than $1 a day in Lima Peru. She now collects the endless plastic waste that covers her local beach to exchange at The Plastic Bank. She has received clothing, tools, supplies, & even a water filtration system. Collectively these items saved hours per day. Maria was able to start her own manufacturing business debt free by 3D printing her inventory one at a time at The Plastic Bank. She now sells custom 3D printed cell phone cases & discovered that the addition of “Made in Peru” could triple her profits. She now employs 5 women from her village to collect the plastic for her. They even set up micro-recycling programs at several local shops to collect it before it becomes waste.

If you like what The Plastic Bank is doing, please share this article. We write these articles to create awareness about initiatives creating positive changes in the world, but they are also meant to inspire others by showing real life examples of people implementing bold new visions meant to improve our future.

For more information on The Plastic Bank, please visit their website.