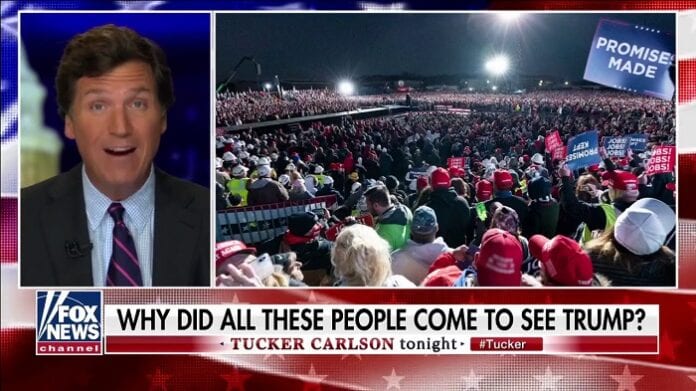 With one day to go before the 2020 election, Tucker Carlson discusses the larger social dynamic happening across America. Carlson asks if President Trump is so evil, why are there unprecedented numbers of Americans coming out and supporting him? President Trump is drawing crowds that you would expect from a rock group or a visit from the pope. 100-mile long caravans and massive boat parades are not something we have ever seen with a presidential candidate, at least in my lifetime.

In my hometown, Trump supporters are filling train station parking lots at night and most of the cars that pass are sounding their horns in support. I live in the very blue state of New York. We see other grassroots Trump rallies happening in democratic strongholds like Miami and California too.

We are just hours away from the national election and suddenly there is so much going on, so much news it is impossible to metabolize. Claims and slogans and rumors coming in from every direction. Been online recently? Checked your phone? It’s overwhelming. We’re going to have the very latest news throughout the hour tonight. We want to begin a different way, we want to begin this show with a single image.

Now, the image doesn’t tell you who is going to or lose tomorrow. Instead, it’s a metaphor for the election itself and for the moment we are living in and will continue to live in. The picture is from a town called Butler, Pennsylvania, it’s 35 miles north of Pittsburgh. The president held a rally there over the weekend.

Butler is like a lot of places you will find in this country once you head inland from the coasts. It’s a former industrial town, the made Pullman railcars there for many years, but it’s been losing population for decades. They still have nice people in Butler. For 60 grand, you can buy a decent house there. It’s a place you might be happy in, but our professional class is not impressed by Butler. They don’t consider Butler, Pennsylvania, or places like it, the future. To them, places like Butler are embarrassing relics of a past best forgotten, the men of Butler may have built this country and they did but they mean nothing to our leaders now.

You can be certain of that because when large numbers of people in Butler started killing themselves with narcotics, no one in Washington or New York or Los Angeles said anything about it and so it continued. There have been so many opioid deaths in Butler that a few years ago, residents built an overdose memorial in the middle of town. MSNBC didn’t cover that. Given all of that, it was interesting how the people around Butler feel about Donald Trump. Here’s a picture of the presidents rally there on Saturday night. Tens of thousands of people came, so many people that the crowd obscured the horizon. It looked like a visit from the Pope.

When was the last time a political speech drew that many people? Well, the media didn’t ask. Instead, they attacked the rallies as a super-spreader event, Trump endangers thousands in Pennsylvania. OK, we’ll leave the epidemiology to CNN but the question still hung in the air, why did all those people come? Why? They must’ve known that Donald Trump is the most evil man who’s ever lived. They’ve heard that every day for five years. They know people who support Donald Trump are also evil. They’re bigots, they’re morons, they’re racist cult members. They know that Americans have been fired from their jobs for supporting Donald Trump, not to mention kicked off social media, belittled by their kids’ teachers, shunned by decent society. Only losers and freaks support Donald Trump. People in Butler knew all of that, but on Saturday, they went to the Donald Trump rally anyway.

Why exactly did they do that? We should be pondering that question deeply as we watch tomorrow’s returns and as we live through the aftermath of them. Millions of Americans sincerely love Donald Trump, they love him in spite of everything they’ve heard. They love him often in spite of himself. They’re not diluted, they know exactly who Trump is, they love him anyway. They love Donald Trump because no one else loves them. The country they built, the country of their ancestors fought for over hundreds of years has left them to die on their unfashionable little towns mocked and despised by the sneering half-wits with finance degrees, but no actual skills, who seem to run everything all of a sudden.

Whatever Donald Trump faults, he’s better than the people in charge. At least he doesn’t hate them for their weakness. Donald Trump in other words is and has always been a living indictment of the people who run this country, that was true four years ago when Trump came out of nowhere to win the presidency and it’s every bit as true right now, maybe even more true than it’s ever been and it will remain true regardless of whether Donald Trump wins reelection.

Trump grows because they failed, it’s as simple as that. If the people in charge had done a halfway decent job with the country they inherited, if they cared about anything other than themselves even for just a moment, Donald Trump would still be hosting “Celebrity Apprentice,” but they didn’t. Instead, they were incompetent and narcissistic and cruel and relentlessly dishonest. They wrecked what they didn’t build, they lied about it. They hurt anyone who told the truth about what they were doing. That’s true. We watched.