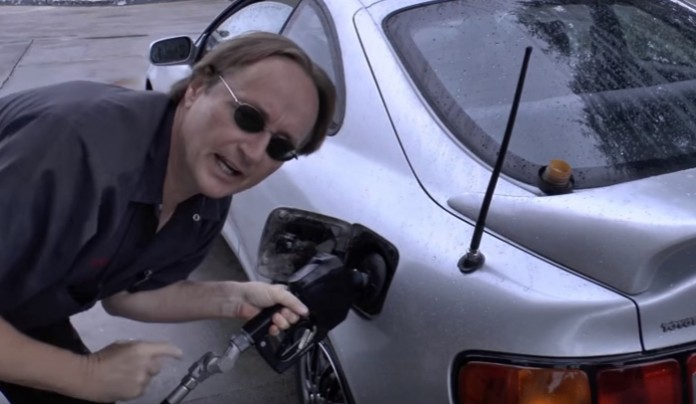 Electric cars and hybrid vehicles are what’s new right now. But despite the presence of these competitors in the automobile market, gas-powered vehicles seem to be the kings of the road. Advocates of the environment have called for the lessened use of gas to power cars given that they are detrimental to the world we live in. But despite that, there are still advantages to a gas-powered car. Should gas still be used in vehicles or is it time to make a change?

1. It still costs less.
The price of technology needed to power hybrid cars will continue to drop, but despite that, gasoline-powered vehicles are still cheaper than these newer kinds of cars. Why is that the case? For one, putting out a good hybrid vehicle takes a whole lot of research and development and of course, that means shelling out a lot of money as well. The technology behind gas-powered cars, on the other hand, has been around for many, many years and has seen improvements over the course of time as well. In other words, hybrids are just starting out but gas-powered cars have been in the game a long time and have improved since then.

Hybrid cars may also cost more to maintain given the kind of components used to build them. For instance, when an electric motor or battery pack needs to be replaced, one would most likely need to go to a specialist while breakdowns with gas-powered vehicles can be fixed by someone with a good knowledge of cars.

Above all, those with limited budgets would most likely choose a gas-powered vehicle given the friendlier price tag. And this even applies to used cars. Besides, given the newness of hybrid vehicles, there likely won’t be lots of used ones up for sale.

2. It covers wider distances.
A 20-gallon gas tank on a car has about an average fuel economy of 20 miles per gallon. This means that a gas-powered vehicle can travel about 400 miles before it needs to be refueled. This is different from hybrid vehicles which depend on how much energy is consumed during travel. But to sum this up quickly: cars powered by gas will almost always be able to travel longer distances.

An issue about the availability of charging stations has also been brought up. There aren’t that many these days compared to the number of gas stations one can find at various exits around the country.

3. It has greater raw power.
Early models of hybrid vehicles compromised on power to achieve better fuel efficiency. On the other hand, vehicles that rely on gas can become more powerful when they are customized for fuel efficiency. For instance, the displacement-on-demand system allows gas-powered vehicles to shut down some cylinders in order to save has under certain conditions. As a result, this gives drives more horsepower and efficiency.

1. It contributes to pollution.
Given the concerns over global warming, some manufacturers are looking into redefining the way their car operates. In other words, they are looking into it as being more eco-friendly. This means that there are gas-powered vehicles that are marketed as environmentally friendly machines.

But others argue that the best option is to truly switch to hybrid vehicles that don’t spout fumes that contribute to the already dire state of our planet. More and more people are becoming reliant on vehicles to get them from Point A to Point B and everywhere in between. The math is pretty simple: more vehicles always means more pollution. If we want to save our planet, switching to alternative ways to still be able to offer the convenience of travel but without the need to release toxic chemicals into the atmosphere is a good start.

2. It is a health hazard.
Gasoline-powered vehicles aren’t just problems for the environment, they cause health problems for humans too. A person filling up the tank is exposed to gasoline, but worse things can happen: a gas leak in the engine or a general spill or accident. What happens if gasoline contaminates drinking water or nearby soil?

According to the Department of Public Health, high levels of chemicals taken in from gasoline exposure like benzene may cause cancer. Although the long-term effects of occasional contact with gasoline isn’t widely known, the inhalation of fumes can lead to confusion, dizziness, headaches and breathing difficulties.

3. It relies on fossil fuels.
The supply of fossil fuels on earth is dwindling. Since we can only get estimates, there is no exact proof of how much more is there to use. As such, people are calling for alternative methods to be used now rather than later. The argument is that we as a species should not wait until our resources are depleted to start acting. We should do what we can now.

Yes, progress has been made with regards to alternatives. Now, we have hybrid and electric cars running on roads. But there are other things that need to be done as well, particularly when it comes to prices. How can we totally switch from risky to safe when only a certain percent of the population can afford to own such cars?

4. It causes some countries to hold too much power.
It has been said that wars have been raged because of oil. Others covet what they can’t get, and do whatever it takes to get it. Much of the Middle East is rich in oil and we are dependent on them. Finding an alternative source will lessen their strangehold and maybe even bring about much needed peace.

Whether gasoline-powered vehicles stay or go remains to be seen. As of now, lots of manufacturers are looking into curbing their carbon emissions but still producing vehicles that answers the needs of customers. A lot of hybrid vehicles have been released into the market as well and are gaining the interest of customers who want to help cut their carbon footprint as well.

Yes, gasoline-powered vehicles to have certain advantages but they’re harmful for the planet. On the other hand, hybrid vehicles are a dream for those who are conscious about the environment, but let’s face it: not all of them come at a cheap price.