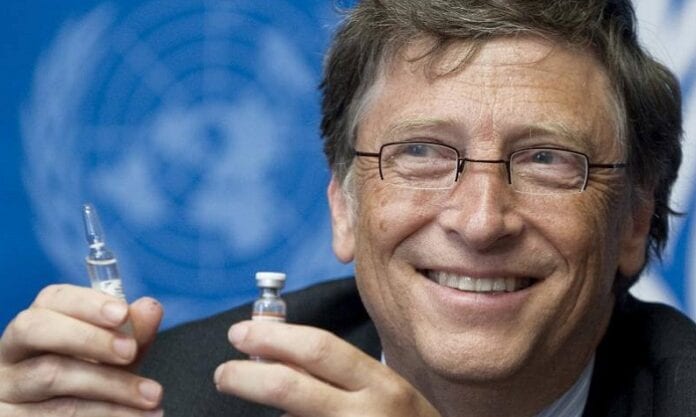 Since the appearance of COVID-19 last year, we have been in a mad rush to develop a vaccine (forgoing typical safety trials) for a virus that turns out to have a 99.7% recovery rate. Why? The World Health Organization warns that even after being vaccinated we will still need to wear masks. And, by the way, the vaccine may not prevent the further spread of the virus. What?? Isn’t that the whole point of a vaccine?

So why is there such a powerful movement to vaccinate the world with an experimental vaccine that may not even stop the spread of this virus? A vaccine that has so far recorded 50 times the adverse reactions of the seasonal influenza vaccine. A virus that seems to have mutated twice already. This makes no sense at all! With the preliminary adverse events being reported, the vaccine may turn out to be more dangerous than the virus itself.

Who is behind this heavily promoted campaign to vaccinate the entire world population? One of the most visible proponents is Bill Gates. Aside from being heavily invested in the vaccine industry and the World Health Organization, (and many other global initiatives that promote vaccines) how exactly is Bill Gates qualified to influence public health policy? He is not an immunologist or even an elected official, yet for some reason, we look to him when setting public health policies. Bill Gates’s lengthy track record with mass vaccination campaigns in other countries has been disastrous, yet we still take his advice. Why!?

Did you know that there are lawmakers in the Italian government that believe Gates should be investigated for crimes against humanity and think his vaccination campaign is used as a depopulation program? Gates seems to be obsessed with global population levels and even stated in a well known Ted Talk that vaccines could be used to reduce the population. Really? The excuse that Gates gave for such a comment is that by vaccinating, more children will live so parents will not need to have as many children to take care of them in their elder years. Does that answer make sense to you?

Many believe that Gates is actually part of a eugenics movement disguised as healthcare for underdeveloped countries. It is no secret that his family has ties with the eugenics movement of the 20th century. In fact, his father sat on board of Planned Parenthood, an organization which many believe is nothing more than a eugenics program. The founder of Planned Parenthood, Margeret Sanger was a known racist steeped in eugenics. Maybe this why almost 80% of all Planned Parenthood facilities are located within walking distance to black and Latino communities. If you do a little research on Margeret Sanger and Bill Gates Senior (don’t use Google, use Ecosia) you will find much more on this topic.

Did you know that the Kenyan Catholic Doctors Association found anti-fertility agents in WHO vaccines administered in Africa? They took samples from all over the country and had them independently tested. Every one of the samples came back positive for the anti-fertility agent. This may seem unbelievable but it’s not like we haven’t used sterilization in the past. Gates and his globalist agenda is not very popular in many other parts of the world either. Robert Kennedy Jr wrote an article detailing all the damage that was done in developing countries around the world by Bill Gates and the organizations he heavily sponsors.

If you want to learn more about who Bill Gates really is, James Corbett from The Corbett Report published an extensive four-part series that takes an in-depth look at Bill Gates. Corey Lynn from Coreys Digs did an extensive report on the contact tracing bill H.R.6666.

Here is the video that is too hot for YouTube:

Related – Mandatory Vaccinations For a Virus With 99% Recovery Rate? WHY?